The Macroverse stretches from decillions of Big Bangs and Big Crunches ago, across multiple universes and dimensions, and into the future. In between each Big Bang and Big Crunch, is a brand new universe and multiple dimensions.

Stories of triumph over adversity in the science fiction-based world of CHROMIUM MAN, SCAVENGERS, DOCTOR CHAOS, RIOT GEAR, PRINCE VANDAL and THE REALM.

Has a large library of comic book characters and stories for development in film, television, and other media. Founded by Scott Mitchell Rosenberg of Malibu Comics. 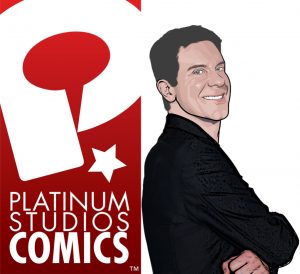 Platinum Studios harnesses the creative power of their extensive comic book library and adapts them for film, television, and other media. Scott Mitchell Rosenberg established Platinum Studios in 1997 following a successful, high-profile career as the founder of Malibu Comics. Malibu Comics was the leading independent comic book company that he sold to Marvel Comics in 1994, then becoming the second highest-ranking executive at Marvel. Malibu Comics has since been acquired by The Walt Disney Company.

Platinum Studios has released films and television programming with Universal Pictures, Paramount Pictures, DreamWorks Pictures, MGM Television, Showtime, and Lionsgate, and has developed film or television with others, including Disney, Time-Warner’s New Line Films, 20th Century Fox, and Sony Pictures Entertainment. Thus far, Platinum Studios, whose comic book library contains other international comic characters as well, is the only company to produce an English language live-action dramatic TV series based on a French or Belgian comic book. Jeremiah, a 35-hour story, told in its entirety, has been on Showtime, Syfy Channel and broadcast television, and aired worldwide. The $150 million dollar production of Cowboys & Aliens, also executive produced by Steven Spielberg is based on characters from the Platinum Studios library.