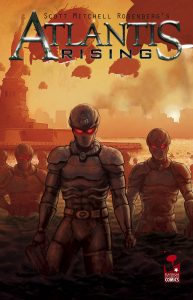 Ten thousand years ago, Atlantis sank, but never died. The domed Atlantean cities progressed, developing an advanced civilization completely unaware of the surface. And the surface, unaware of what lied beneath. Until the Atlanteans were affected by the radiation from an unexploded sunken bomb. Until the Atlanteans were affected by us – the surface – and our expanding population. Now, the two civilizations are on a collision course. And at the brink of a global war.

Scott O. Brown, Man of ComicsTM is an award-winning writer, letterer, and publisher. In addition to Nightfall, Scott has written Atlantis Rising, the self-published They Do Not Die!, and Heaven’s Inferno with Ferran Xalabarder for Heavy Metal magazine. Most recently, he remastered and re-lettered the manga classics Ghost in the Shell, Akira, and Battle Angel: Alita for Kodansha USA.